Delaware: Join us for a virtual town hall at 7 p.m. Thursday!

Please take a minute to email your lawmakers in support of HB 150!

This Thursday night, the Delaware Cannabis Policy Coalition is holding a virtual town hall to respond to concerns around cannabis legalization. Mark your calendars, and we hope you will join us! 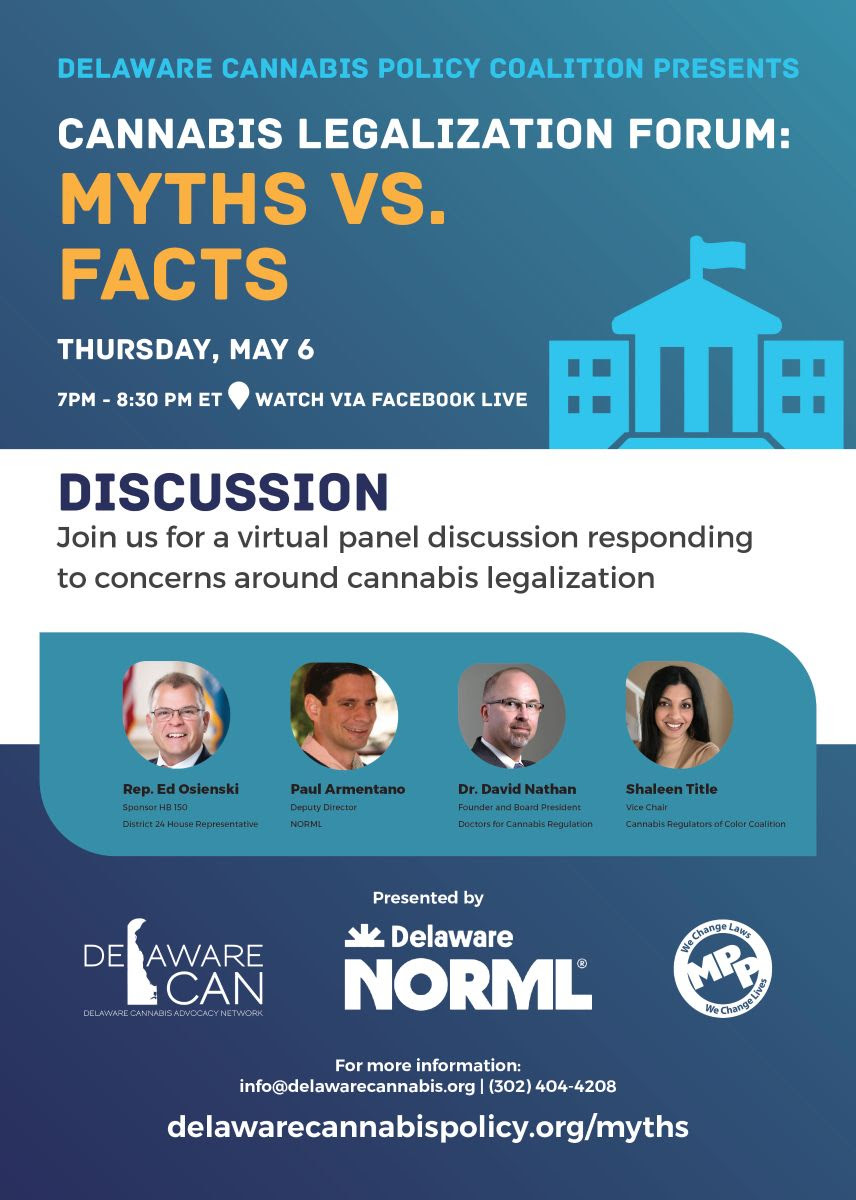 You can check out a full summary of this year’s legalization bill, HB 150, here. We need all hands on deck to make sure this is the year Delaware moves forward with legalization!

As a reminder, we’re still recruiting volunteers to help generate phone calls to legislators in key districts. Please email onaugle@mpp.org if you’re willing to make some calls to constituents of key lawmakers. We’ll send details on how to get started.

And don’t forget to join us for this important discussion on Thursday at 7 p.m., and please also reach out to your lawmakers and ask them to support legalization this year. Be sure to share this message with your family and friends to help us spread the word.

Ask your Connecticut state lawmakers to legalize cannabis this year.

We invite you to join us on Tuesday, May 4 at 6:30 p.m. for a virtual discussion on the status of legalization in the 2021 session and a walk-through of the details of SB 888 – Gov. Lamont’s legalization proposal. 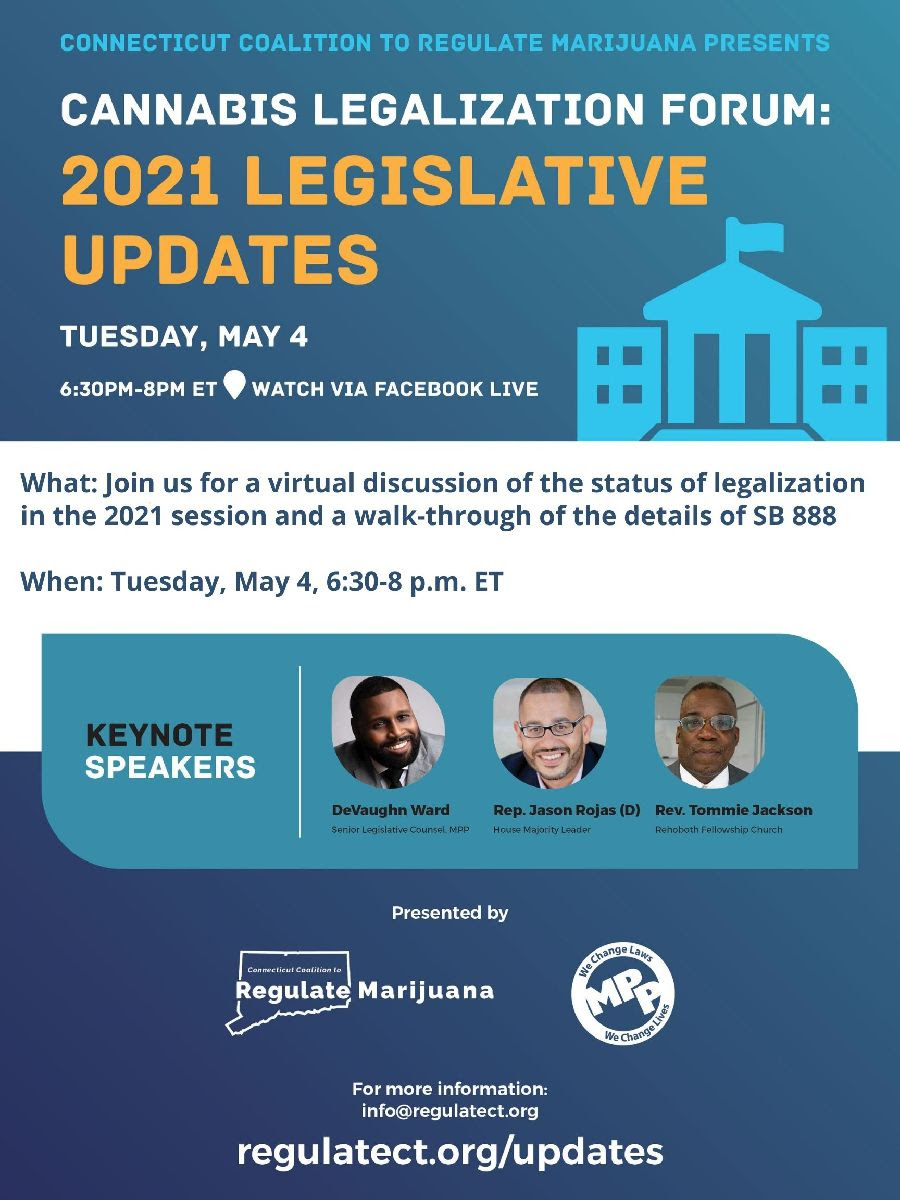 You might recall that earlier this week we shared an updated bill summary reflecting the major improvements to SB 888 since it was first introduced. While negotiations are underway between the legislature and the governor’s office on the final details, we thought it would be a great opportunity to walk through the improved version of the bill and answer questions.

Joining us will be House Majority Leader Rep. Jason Rojas (D) and Rev. Tommie Jackson. The event starts at 6:30 p.m. and will be streamed on Facebook Live. Viewers will be able to submit questions during the event. I hope you’ll find some time to attend.

In the meantime, please spread the word and write your legislators, urging them to support legislation to regulate and tax the sale of cannabis to adults in the 2021 session.

Email your lawmakers and ask them to make 2021 the year Delaware legalizes cannabis for adults.

This Thursday night, the Delaware Cannabis Policy Coalition is holding a virtual town hall to discuss the economic impact of cannabis legalization. Mark your calendars, and we hope you will join us! 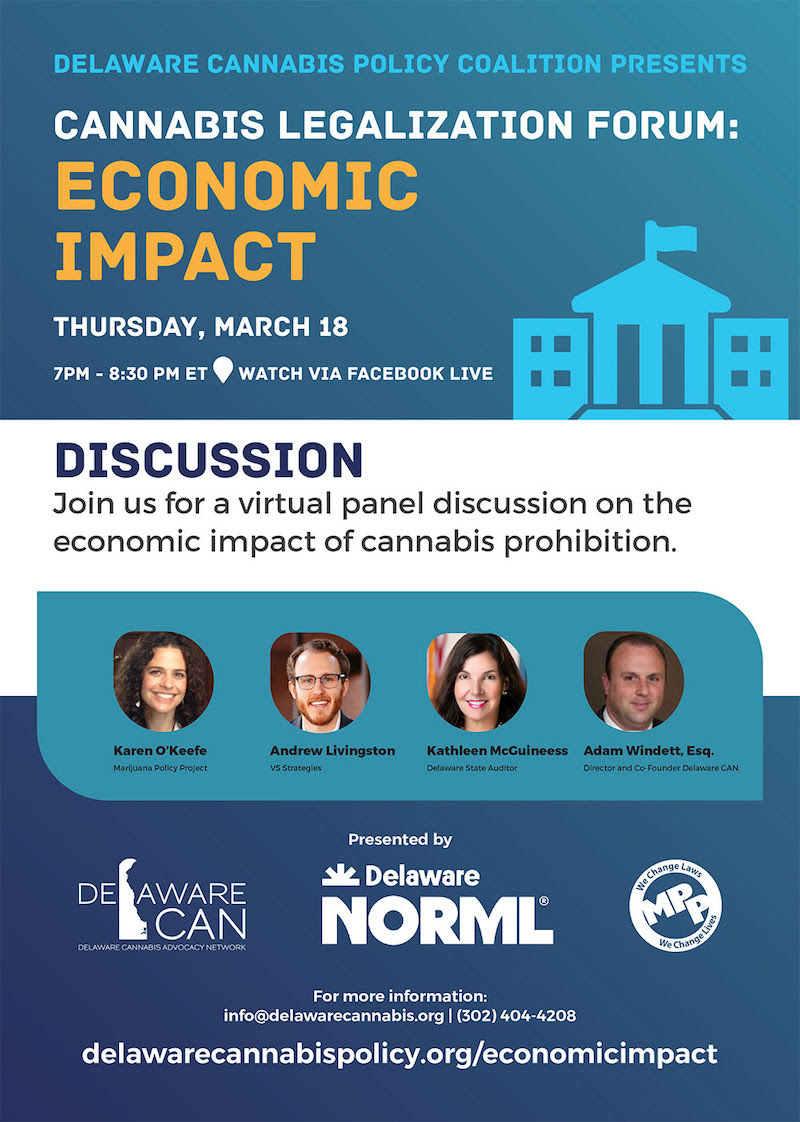 There is increasing momentum for Delaware to move forward with legalization this year. Rep. Ed Osienski is expected to file his 2021 legalization bill soon. Stay tuned for future updates.

Join us for this timely discussion on Thursday at 7 p.m., and please also reach out to your lawmakers and ask them to support legalization this year. Be sure to share this message with your family and friends to help us spread the word.

This should come as no surprise by now, but President Obama has once again failed to address questions about the need for marijuana policy reform in a public forum. Once again, this issue was among the most popular, but it seems that after laughter, disagreement, and capitulation, the president’s responses are wearing thin, and the question will no longer be asked or answered.

Last week, the White House asked for people to submit questions to be asked during a Google+ Hangout with the president. As usual, marijuana questions dominated the site. Unfortunately for the majority of Americans who support making marijuana legal, the popularity of this issue no longer matters.

First, NORML’s question was removed for being inappropriate.

Law Enforcement Against Prohibition spokesperson Stephen Downing submitted a video question that quickly became the second most popular on the site. During the forum, however, the folks at Google decided that the president had already answered their question in previous forums and opted to ignore the people and ask inane questions about midnight snacks and tennis instead.

The White House, of course, had nothing to do with the exclusion of a marijuana reform question (or so they say).

The time has come to demand real answers to these pressing questions, not jokes or simple platitudes. Marijuana prohibition is a failed policy that causes far more harm than good, and alternatives must be seriously discussed in open forums before this juggernaut can do any more damage.

It is time for the president to take this issue seriously.


Obama Thinks Drug Policy Is "Serious Issue," and Not Much Else

President Obama held another public forum yesterday on Youtube, and once again the questions were dominated by concerns about our nation's drug policies. Many in the reform movement were worried that we would be ignored or laughed off again. Well, the President did respond:

We at MPP are pleased that President Obama is at least taking the issue of drug policy reform seriously. But his response is not much better than what President Bush might have said. Yes, we need to improve access to drug treatment and we need to focus on other options in the criminal justice system for first-time, non-violent offenders. But we need to have a far more serious discussion about the potential benefits of creating a legal, regulated market for marijuana.

It is time to end marijuana prohibition and it is inappropriate for the president to group that subject into an across-the-board opposition to "legalizing drugs."