Earlier today, the North Dakota House of Representatives approved two pieces of legislation to legalize, regulate, and tax marijuana for adults 21 and older.

The proposals were introduced by Republican lawmakers who say they personally oppose legalization but are seeking to prevent a more permissive law from being enacted by voters via the 2022 ballot.

House Bill 1420 would permit adults to possess up to an ounce of marijuana, while home cultivation would be prohibited. The legislation directs the North Dakota State Health Council to adopt rules for implementing legal sales through a maximum of 18 state-licensed dispensaries by February 1, 2022. House lawmakers also approved House Bill 1501, which would impose a 10% tax on cultivators and a 15% tax on dispensary sales.

Both bills now head to the Senate. Gov. Doug Burgum has not indicated whether he would sign or veto the measures.

Stay tuned for more updates on the progression of marijuana policy reform legislation! 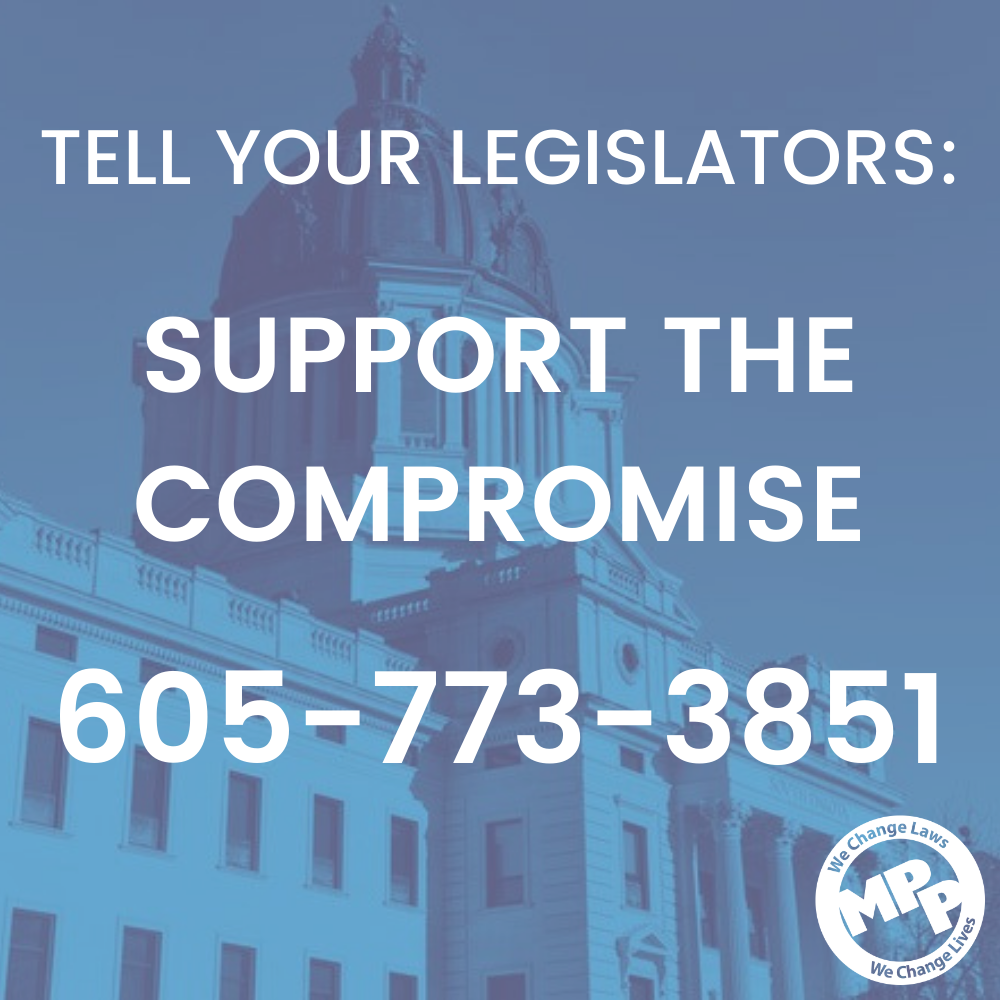 We are urging legislators to support the common sense compromise on the medical marijuana law, House Bill 1100G.

And we are urging voters to call the South Dakota State Capitol at 605-773-3851 and leave a message for your State Representatives.

Leave your name, district, and your message ("support the compromise" or something to that effect). Please be respectful when you call, and ask the page to deliver the message.

If you need to look up your State Representatives, you can use this tool or Open States.

Thank you for supporting sensible and compassionate marijuana policies!

A new poll by Starboard Communications found 72% of South Carolina voters support allowing medical cannabis and only 15% are opposed! But because South Carolina doesn’t have a citizens’ initiative process, the only way to translate that overwhelming support into law is for the state legislature to act.

Please send your state senator and representative an email to let them know you want them to do all they can to get the S.C. Compassionate Care Act passed this year.

Then, to go the extra mile, please follow up with a call to your state senator. We provide talking points and your senator’s phone number to make it easy.

Please write and call your legislators today, then spread the word by sharing this link on social media. Together, we can bring relief to suffering South Carolinians.


Va.: We need your help to fix the legalization bills

Virginia must not criminalize “importing” small amounts of cannabis or increase other penalties — write lawmakers who are working to finalize the legislation today!

Overall, we are happy with the cannabis legalization bills that have passed the Virginia House and Senate. This week, lawmakers from both chambers are engaged in a “conference committee” that is working to resolve differences between the two bills.

Unfortunately, both bills still include one very bad provision that would criminalize bringing small amounts of cannabis into the Commonwealth from another jurisdiction. Both HB 2312 and SB 1406 would create a new criminal penalty, punishable by up to a year in jail, for entering Virginia with less than five pounds of cannabis. The bills do not currently include an exception for one ounce or less of cannabis.

“Importing” small amounts for personal use should not be a criminal offense, and it must be exempted from this new penalty. We have informed lawmakers about the problem, and we hope they will fix it during the reconciliation process, but they haven’t done so yet. Please write the members of the conference committee today and urge them to resolve this issue before they send a final bill to the desk of Gov. Ralph Northam.

Additionally, SB 1406 would increase penalties for public consumption and underage possession from a $25 fine to a fine of up to $250 for a first offense, and it would prohibit adults from sharing cannabis with other adults. The House eliminated these penalty increases from HB 2312, and we are urging lawmakers in both chambers to ensure they are not included in the final bill.

For more information on the differences between HB 2312 and SB 1406, and to see what MPP has recommended to legislators, click here.

After you write your state legislators, please share this message with your friends and family.

Gov. Murphy’s signature ends a three-year campaign to regulate and tax cannabis in the Garden State. As you likely recall, in November 2020, New Jerseyans overwhelmingly approved a ballot referendum supporting cannabis legalization. The following month, the legislature responded with the passage of A.21/S.21 and S.2535. However, both measures stalled due to concerns surrounding penalties for underage use.

Late last week, the Senate Judiciary Committee advanced A.5342, which addresses penalties for underage use. Today, both chambers voted to approve the bill, and Gov. Murphy immediately signed all three bills into law. You can check out a summary of the bills here.

Effective immediately, adults can now legally possess up to six ounces of cannabis or 170 grams of concentrate.

Although Gov. Murphy’s signature means the end of arrests and prosecution for cannabis in New Jersey, it will likely take a few months before residents are able to purchase cannabis from retailers, as the recently formed Cannabis Regulatory Commission will develop rules for adult-use licenses.

We’d like to extend sincere thanks to all of you who helped push to make cannabis reform in New Jersey a reality.


Delaware: Join us Wednesday at 7 p.m. for a virtual town hall!

Email your lawmakers and ask them to make 2021 the year Delaware legalizes cannabis!

This Wednesday night, the Delaware Cannabis Policy Coalition is holding a virtual town hall to discuss the intersections of cannabis legalization, racial justice, and social equity. Mark your calendars, and we hope you will join us! 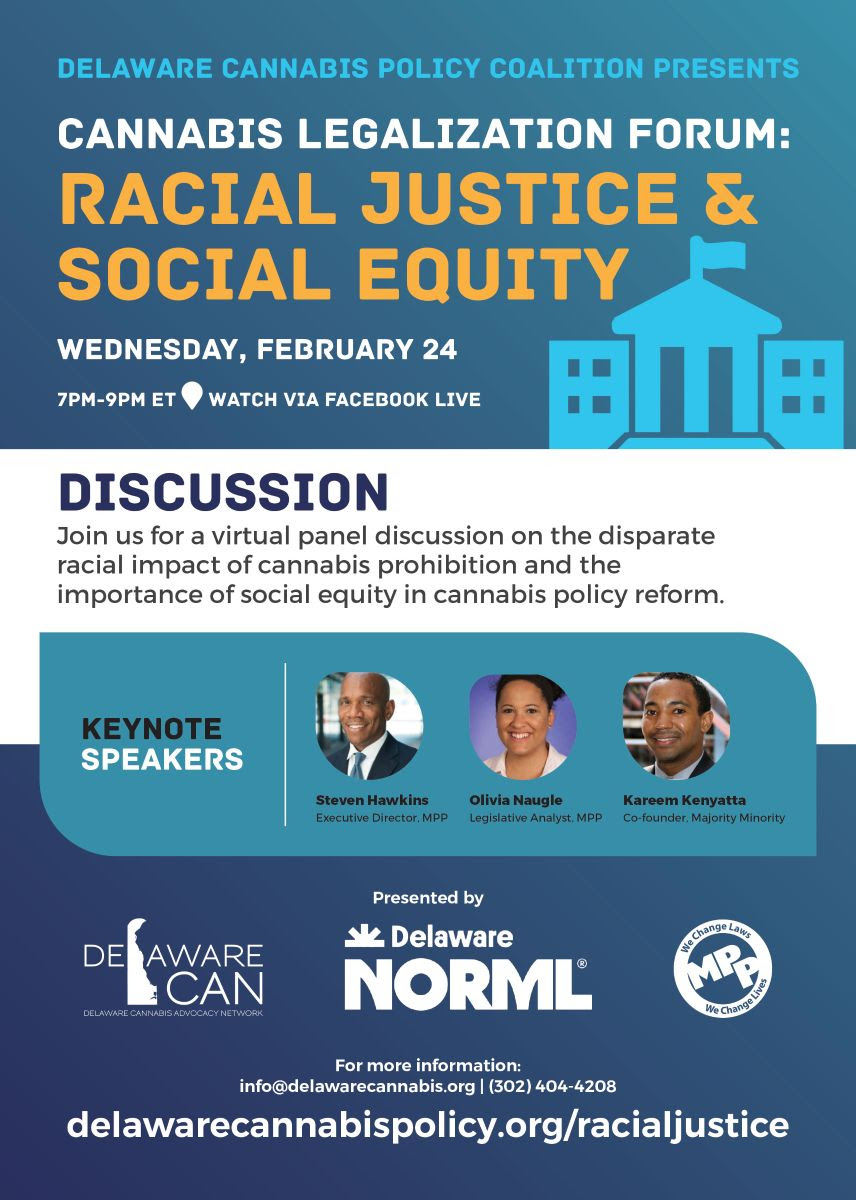 There is increasing momentum for Delaware to move forward with legalization this year. Rep. Ed Osienski is expected to file his 2021 legalization bill soon. He has said he is close to the two-thirds majority we need to pass the House.

Join us for this timely discussion on Wednesday at 7 p.m., and please also reach out to your lawmakers and ask them to support legalization this year. Be sure to share this message with your family and friends to help us spread the word.

SB 231 would make it possible for patients and caregivers to grow their own cannabis and obtain edibles from dispensaries — urge your elected officials to support this legislation!

West Virginia’s medical cannabis law doesn’t allow patients to cultivate cannabis, smoke cannabis, or purchase edibles, but those problems aren’t the state Senate’s fault. When the state legislature passed the medical cannabis bill in 2017, the Senate supported including home cultivation and allowing access to edibles and whole-plant cannabis, but the House insisted on making the program as restrictive as possible.

This year, several senators, led by Senate Majority Leader Tom Takubo (R-Kanawha), are trying to improve the program by introducing SB 231. This important bill would eliminate the prohibition on edibles and smoking and allow patients and caregivers to obtain temporary certifications to grow their own plants. Medical practitioners would be authorized to issue “compassion certificates,” which would allow possession of up to 12 mature plants and 12 seedlings per patient.

Please contact your delegates and senators now and urge them to support SB 231!

The bill would allow compassion certificates to be voided in the future if the state determines that patients have sufficient access to medical cannabis from the dispensaries. Regardless, this bill would be extremely beneficial for patients who won’t be able to afford the cannabis products that will be available at dispensaries.

After your write your elected officials, please share this message with anybody you know who wants to help improve West Virginia’s medical cannabis program!

Ask your state lawmakers to legalize cannabis this year.

The Judiciary Committee recently announced that the public hearing for S.B. 888 – An Act Responsibly and Equitably Regulating Adult-Use Cannabis – is scheduled for Friday, February 26 at 10:00 a.m.

If you wish to testify, you must register using the Online Testimony Registration Form. Registration will close on February 25 at 3:00 p.m. Speaker order of approved registrants will be listed in a randomized order and posted on the Judiciary Committee website on February 26 at 8:00 a.m. under Public Hearing Testimony. If you do not have internet access, you may provide testimony via telephone. To register to testify by phone, call the Phone Registrant Line at (860) 240-5255 to leave your contact information. Please email written testimony in Word or PDF format to Judtestimony@cga.ct.gov.

Testimony should clearly state testifier name and related bill number. The first hour of the hearing will be limited to constitutional officers, state agency heads, and chief elected municipal officials. Speakers will be limited to three minutes of testimony. The committee encourages witnesses to submit a written statement and to condense oral testimony to a summary of that statement. All public hearing testimony, written and spoken, is public information. As such, it will be made available on the CGA website and indexed by internet search engines.

MPP will be imploring the committee to advance the bill, but to first make revisions to make it stronger and more explicit on equity. We’ll post some tips for testifying shortly. In the meantime, feel free to check out our summary of the bill here, and be sure to write your legislators urging them to support legislation to regulate and tax the sale of cannabis to adults in the 2021 session.

Ask your lawmakers to end prohibition in 2021!

On Monday, the House Health and Human Services Committee advanced (7-4) Rep. Javier Martinez’ HB 12, which would legalize cannabis for adult use. The bill now heads to additional committees for consideration.

Ask your lawmakers to support legalizing cannabis this year!

In addition to legalizing personal possession of at least two ounces of cannabis, HB 12 would also allow home cultivation of six mature plants, provide for automatic expungement of prior cannabis convictions, and use tax revenue to reinvest in communities disproportionately impacted by prohibition.

Top lawmakers have signaled that this could be the year New Mexico moves forward with legalization, and Gov. Michelle Lujan Grisham has included legalization in her list of priorities for the 2021 session.

It’s important your lawmakers hear from you. Email them today and urge them to support ending prohibition this year.

Polling has shown that a majority of New Mexicans support legalizing, taxing, and regulating cannabis for adult use, and 15 states — including New Mexico’s neighbors, Arizona and Colorado — have legalized cannabis for adults 21 and older.

After you email your lawmakers, please forward this message to your family and friends and ask that they do the same.

Ask your state lawmakers to legalize cannabis this year.

Good news! Since the beginning of the legislative session in January, there have been several cannabis-related bills introduced. Just this week, the Hawaii Legislature advanced two separate measures that would expand decriminalization and legalize cannabis. S.B. 758 would increase the possession threshold to one ounce from three grams. The Senate Public Safety, Intergovernmental and Military Affairs Committee unanimously advanced S.B. 758 in a 5-0 vote.

Shortly after, the committee advanced S.B. 767, which would legalize cannabis and allow licensed businesses to cultivate, produce, and sell cannabis products. It would also allow adult home cultivation of up to three mature plants. S.B. 767 advanced in a 4-1 vote and now heads to a joint hearing between the Senate Judiciary and Ways & Means Committees. Meanwhile, S.B. 758 is headed to the Judiciary Committee for a hearing.

Both bills’ futures are uncertain, as Gov. Ige appears to be generally unsupportive of legalization. However, in the interim, we urge you to contact your lawmakers and let them know you support legalization. As both bills progress, we’ll be sure to keep you updated.

Mahalo for your continued support.